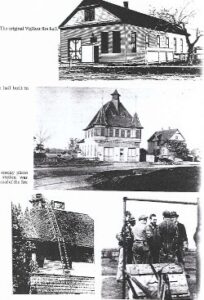 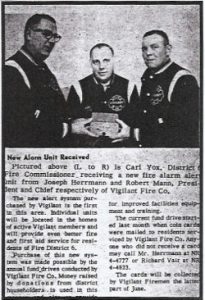 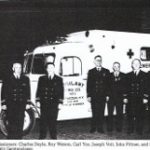 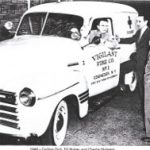 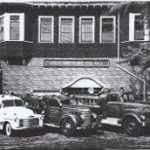 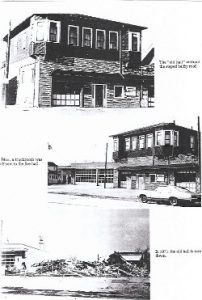 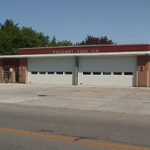 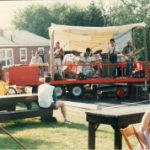 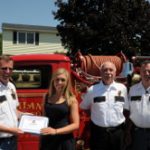 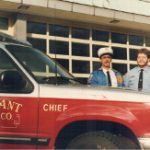 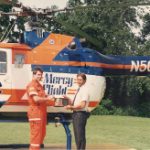 The History of the Vigilant Fire Company

A few of the old time members recall an incident in the 1930s when a fire call rang out.  The call was for an assist in Gardenville and Vigilant was needed for mutual aid.  Being first on the scene of fire was a proud moment for a company to beat another company to the scene that was in their area.

Another incident was when the first motorized engine from Vigilant was driven so fast over the railroad tracks on Union that the engine fell out of the truck.

The first audible alarm at the company was a large metal ring off of a railroad car from the Gardenville Yard of the New York Central Railroad.  It is believed that Bennie Holstein obtained the wheel rim.  When a fire was spotted, the first member to the hall would take a solid metal poll and smack the hanging hollow metal wheel rim.  The sound was unique and loud and could be heard for long distances.  Just like today, members would race to the hall, get dressed in their fire gear, hook to the horses and respond to the call.

Vigilant was one of the first fire companies in the area to install an alarm system.  It was maintenanind by John Holstein.  Each alarm box was numbered.  When an alarm was turned in, a bell in the steeple of the United Church of Christ would toll out the number of the alarm box.  Each firefighter had a white card showing the box numbers and locations.

To become a member, a candidate had to submit an application with a $5 fee and be interviewed by the “Vigilance Committee” or what is now referred to as the investigating committee.

As much as Vigilant was formed as a protection against fires, the company evolved into a center for social gatherings in the early years.  The social environment of being a member still exists today, but in a much different manner.  During the early years, a popular way of socializing and at the same time raising money was by holding card parties at the hall.  PEDRO was the game most liked.  The card and dance parties continued through the 1950s.

The first motorized fire truck was obtained in 1920s The 1920 Buffalo Chemical Fire Truck was purchased for $6,500.  This 1 ½ ton engine, model E12-120, received its chassis from Federal Motor Company in Detroit, MI.  During the early fall 1920, the Vigilant member and Auxiliary held a week long fair at the hall to raise money for the new truck.  They held dances, sold items, had pony rides and other entertainments.

The West Seneca Town Board recognize the need to establish and organized system for managing the growing fire companies in town.  In accordance with NYS Town Law, the board established six formal fire districts on September 4, 1935.  Vigilant became known as West Seneca Fire District #6.  A five-member commissioner board was appointed to a temporary term, which would expire on December 31, 1936.

The new board quickly established an operating budget in 1936 in the amount of $1,784.  These funds were set aside to buy rubber coats, boots, gas masks, wool mittens, pay for utilities, insurance and rental expenses.

On December 8, 1935, the first commissioner election were held for the West Seneca Fire District #6.  The results are as follows:

In 1936, the town witnessed numerous floods and Vigilant responded to 38 alarms answered, 4 of which were false alarms and 14 assists to other companies.

On April 3, 1938, there was a large fire on Seneca Street in Seneca Hose’s District.  One house was a total loss and two others received heavy damage.  Over 950 feet of hose was laid by Vigilant, and the pumpers worked continuously for over two hours.

The following years, there was an increase in calls to 50 for the year.  These included 28 assist class to other fire companies.

The 1940s were a somber time in the country due to World War II.  A motion was passed January 7, 1942,  based on the request from the Erie County Council of Civil Defense that they hall should be occupied at all times.  This was to prevent enemy agents form destroying fire equipment, which should have been disastrous if this area were attacked.    Vigilant erected a lookout tower on the roof of the hall to observe for enemy planes.   After the war threat was over, Vigilant went back to normal operations.

On May 19, 1948, a special election was held at the hall for authorizing the purchase of a 1948 Chevrolet Panel Truck to respond to emergency first aid calls.  Vigilant was one of three Erie County fire companies that they had a squad for respond to rescues and first aid calls.  A group of twenty members took a six-week first aid course, which qualifies them as first aid responders.  The other fire companies at the time were The National Hose Company of the city of Tonawanda and the Main & Transit Fire Company of Williamsville.

Ed Huber was chief at the time the rescue squad began, and looked to First Aid Captain Charlie Holstein and Fire Captain Carlton Gick to the the Squad.    We will respond to first aid and rescue calls on a 24-hour basis.  The only difference is of course the complexity of vehicles used and the training the members receive today.

In the late 1950s, new red lights on the fire trucks, first aid standbys at the HS football games, purchase of the first smoke ejector, and authorization for the first mobile credit card for the chief to buy gas, electronic windshield wipers for the trucks.  The budget was $10,082.50.  The truckroom was remodeled and finished on October 23, 1958.

In 1963, firefighter received home receiver to alert them of a fire call.  Fire Chief, Dave Gooch was authorized to use a siren on his personal car in 1965.  Also that year, it was decided that any member who answered ten or more calls would receive a key to the hall.

On Sunday, October 10, 1965, there was a dedication and Cornerstone Laying Ceremony at the new fire hall.  President John Schneider received a US Flag from the US Congressman Richard McCarthy and a State of New York flag from Bertrand Hoak NY State Senator.

The Ed Keller Award is a special award bestowed upon a member of the Fire Company who has provided outstanding service to the community and the company.  A large plaque is proudly displayed in the fire hall with the recipient’s names and hear they received the award.  It is presented at the annual installation of officers usually held in January of each year.  The winner is generally chosen by the past seven receivers of the award.  The first Annual Award was presented to Ed Keller in 1968 for whom the award is named.   Ed was presented the plaque for his outstanding performance as a volunteer firefighter through the years and for his untiring service to the entire membership of Vigilant.

The budget for 1970 grew to $34,518.  Scott Air Paks were introduced into the company two paks were purchased at a cost of $191 each.  Today, these paks are an essential part of a firefighter’s gear.

On February 27 1970, the Vigilant Ladies Auxiliary was organized and founded.  Vigilant Truckroom officers wives; Harriet Wonderly, Cynthia O’Hare, Elizabeth Nash, Alane Hoy, Lorraine Falkner and Ruth Mann met with Officers of the ECVFA on March 10 1970 to discuss setting up the Auxiliary.  The first official meeting of the Vigilant Ladies Auxiliary was on April 14, 1970 and the first elected officers were  President Cynthia O’Hare; Vice President, Gladys Gick; Secretary Carole Donahue; Treasurer Marcella Herkey and Sergeant at Arms, Billie Jane Walkden.    The Auxiliary has continued to this day to offer consistent assistance and support to the Vigilant Fire Company membership in anyway needed.

In 1978, the award of Firefighter of the year and First Aider of the Year was established to be presented to an active firefighter who has demonstrated to the Chief that he or she is proficient in firematics or first aide and has performed their duties in an outstanding manner during the past year.  The Chief receives input from the Assistant Chief’s and line officers before a decision is made.  This most prestigious honor is also presented at the annual installation dinner.

Doctor James (DOC) Ehinger was appointed as Vigilant 9C to enable him to answer all calls.  This motion was passed on September 24, 1979.

In 1980, eight small Motorola pagers were purchased for firefighters to alert them of calls.  Prior to this time, they were alerted to calls by use of a home plectron alert receiver, which could be heard several houses away when it rang.

On June 24, 1991, a decision was made to purchase a 1991 Ford Excellence First Aid Ambulance from West Seneca Emergency Equipment at a cost of $79,412.  At the same time, a motion passed that permitted the purchase of a 1991 Ford Explorer at a cost of $19,025 to be used by the Vigilant Fire Chief in responding to all calls.  Gary Parucki was the first Chief to drive a dedicated chief’s car provided by the fire District.

A washer and dryer was purchased in 1992 to allow firefighters to clean their turn out gear after fighting a fire.  The same year Vigilant purchased an automatic defibrillator for first aid calls, which allows the first aid, respond to increase from a basic life support unit to an advanced life support unit.

In 1995, a new Ford Explorer was purchased for use by the Chief when respond to calls.  The old Explorer was handed down to the First Assistant Chief, for his rapid response.  Later that year a new four-wheel drive pick-up vehicle was purchase to carry an inflatable boat and water rescue personnel.

The Vigilant Fire Company, 100-year book created in 1996, has supplied this information.